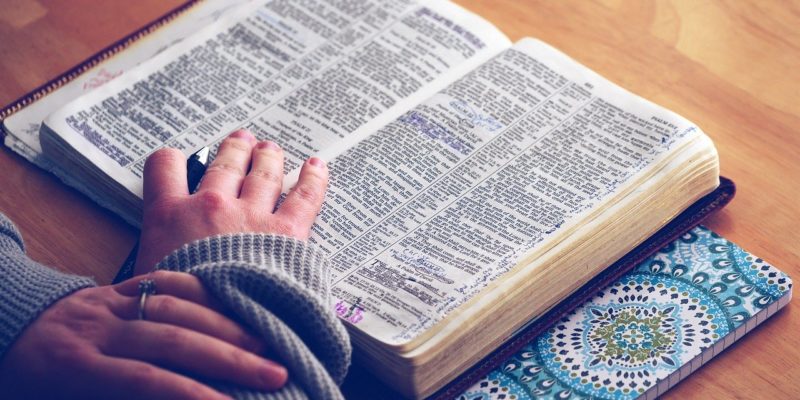 From Reclaiming the Lost Art of Biblical Meditation by Robert Morgan:

Meditation gives hope in even our bleakest moments. Several years ago, while writing The Lord Is My Shepherd, I interviewed Maurice Pink, British World War II veteran who shared his experiences as a nineteen-year-old sailor when torpedoes struck his ship on December 10, 1941.

Maurice, three decks down, felt water crawling up his legs. He clambered up ladders and through passages, made it to the deck, stripped off his clothes, and jumped into the shark-infested South China Sea as the ship quickly sank. He felt disoriented, unsure of which way to swim, and he began to panic.

At that moment, he said, the Twenty-third Psalm came to mind. Treading water, he began quoting those words over and over. They were better than a life vest. They kept him unsinkable until the British destroyer HMS Electra rescued him an hour later.

“Would you like me to read what I’ve written about my experience?” he asked me.

There are times in your life when things don’t go right and you feel all alone. That happened to me on December 10, 1941, when I was on the battle cruiser HMS Repulse with the nearby HMS Prince of Wales. We were attacked by the Japanese air force, which resulted in both ships being sunk. I found myself alone in the water, not able to see anyone else. It was then that the Twenty-third Psalm came into my head, and I realized I was not alone. I had a Shepherd. The Lord was my Shepherd; I did not need to want. I was not in green pastures, but in oily waters; but He restored my soul. Even though I was walking in the shadow of death, I was to fear no evil for He was with me.

The rod and staff did not ring a bell with me until voices above me were shouting. Looking up there was a big destroyer alongside me, HMS Electra, with nets over the side, which allowed me to climb up to safety. That was my rod and staff. I didn’t have a table set before me, but I did get a cup of the ship’s cocoa.

Since that day goodness and mercy have followed me all the days of my life, and when I think back to that day, I wonder what would have happened if I had died. There again, the psalm had the answer: I would dwell in the house of the Lord forever.

Thank you, Lord, for being my Shepherd and for the Twenty-third Psalm.

Robert Morgan, the Author continues on: That’s meditation if I’ve ever heard it!

I’ve never been literally shipwrecked, but I have had times when things didn’t go right and I’ve felt all alone. In such times I’ve often quoted Psalm 23, picturing its images and talking with its Good Shepherd. Once I slept fitfully on the sofa for several weeks because I couldn’t relax in bed due to anxiety. Psalm 23 was my sleeping draught. I quoted it over and over, forcing my mind to focus on it rather than on my worries. I believe everyone on earth should know Psalm 23 by heart, because it can keep our heads above water when we feel overwhelmed.

The Lord is my Shepherd; I shall not want

He maketh me to lie down in green pastures; He leadeth me beside the still waters.

He restoreth my soul; He leadeth me in the paths of righteousness for His name’s sake.

Yea, though I walk through the valley of the shadow of death, I will fear no evil; for thou art with me: thy rod and thy staff they comfort me.

Thou preparest a table before me in the presence of mine enemies; Thou anointest my head with oil; my cup runneth over.

Surely goodness and mercy shall follow me all the days of my life; and I will dwell in the house of the Lord for ever.