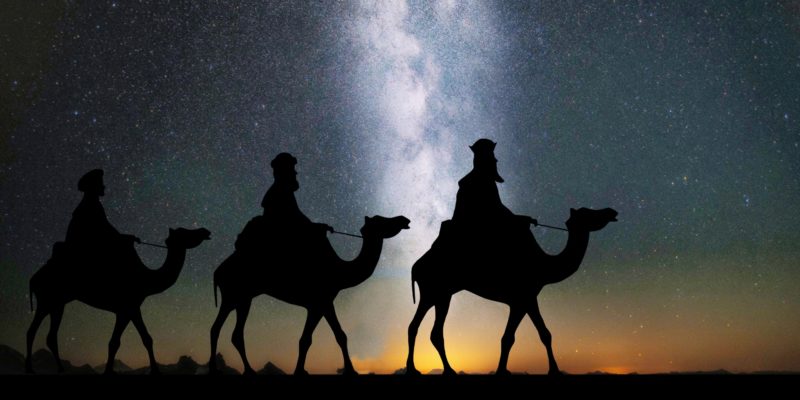 Matthew 2:1-12
In the time of King Herod, after Jesus was born in Bethlehem of Judea, wise men from the East came to Jerusalem, asking, “Where is the child who has been born king of the Jews? For we observed his star at its rising, and have come to pay him homage.” When King Herod heard this, he was frightened and all Jerusalem with him; and calling together all the chief priests and scribes of the people, he inquired of them where the Messiah was to be born. They told him, “In Bethlehem of Judea; for so it has been written by the prophet: ‘And you, Bethlehem, in the land of Judah, are by no means least among the rulers of Judah; for from you shall come a ruler who is to shepherd my people Israel.'” Then Herod secretly called for the wise men and learned from them the exact time when the star had appeared. Then he sent them to Bethlehem, saying, “Go and search diligently for the child; and when you have found him, bring me word so that I may also go and pay him homage.” When they had heard the king, they set out; and there, ahead of them, went the star that they had seen at its rising, until it stopped over the place where the child was. When they saw that the star had stopped, they were overwhelmed with joy. On entering the house, they saw the child with Mary his mother; and they knelt down and paid him homage. Then, opening their treasure chests, they offered him gifts of gold, frankincense, and myrrh. And having been warned in a dream not to return to Herod, they left for their own country by another path.

When the wise men from the East came to Jerusalem searching for the child who was born king of the Jews, they had been on a long journey.  Imagine with me some of the conversations they might have had along the way:

At the beginning of the journey: This is so exciting.  We are going to see the King! Can’t wait!

Weeks or Months Later: Are we there yet?  What if we are wrong?  What about the rest of the Family back home?  What if we run out of supplies?  You are really getting on my nerves…..can’t you slow down/speed up/stop talking? It is really hot out here.  It is really cold tonight.  Why didn’t we pack more….

And yet later in Jerusalem:   Why doesn’t Herod, the ruler in Jerusalem know anything about this?  Could we be lost?  We’ve got to be getting close.  Why isn’t everyone celebrating?
Herod wants us to lead him to the King of the Jews.  Yay!  We can help guide him to worship the King as well.  We better hurry along to Bethlehem.

Then:  We found Him, the King of the Jews.  And His Mother was with Him.  We accomplished what we came for!  Now we paid Him the homage we came to give and shared the gifts we brought with us.

Right After Celebrating:  Although we found Him, our dream advises us that we must protect Him from the wrath of Herod.  We are not to reveal what has been revealed to us.  So we must return by another path and not reveal the Truth to His own people.  How strange and who would have expected this?

And so they return home. Mission accomplished and yet trouble is stirred.

I can only imagine that the wise men felt hopeful, confused, exhausted, concerned, lost, wonder, dismay, and amazement on the road they traveled.  Yet together they made the journey, accomplished their desire to seek and find the Lord even when the road was long, hazardous, and costly.  As we gather together, I look around this Group and I see many of the same characteristics of these wise men. Together we can encourage one another down this road of unexpected ups n downs, trusting that God’s plan for our lives and our loved one’s lives will be fulfilled.  And though others may not understand or may be threatened by the circumstances of the mental illness, we will find ways to grow in loving God and others in the midst of our journey.  And together we can be Wise Men and Women who seek God and find Him.  As the saying goes “Wise Men still Seek Him.”  And yes, He can be found even though circumstances are confusing.  His Story is still being written through the lives we are living this day.  Together we can encourage one another to stay the course and press forward as we focus on paying homage to our Messiah.  God’s Story continues today.  And aren’t we blessed to be part of it?

As Helen Roseveare (a famous English missionary to the Congo who passed away this year at 91) said,

Today, Together, we celebrate this Privilege.